Bratislava, the capital of Slovakia, with a population of less than a million people feels more like a town but has a lot to offer to its visitors. The city is built on the banks of Danube river where you can take a stroll or even a short cruise and it is so tiny that everything is in walking distance. One of the main attractions is St. Martin’s Cathedral with its famous crypts and catacombs, situated on the western border of the old city.

From that point you can take a walk in the small streets of the old city where you will find a lot of lovely restaurants and confectionery stores as well as breweries. In the end of Michael’s street and on the north border of the old city you Find Michael’s gate, the only city gate that has been preserved from the medieval fortifications of Bratislava and is now a museum of weapons. On the 6th floor of the tower there is a balcony offering a view the old city and Bratislava Castle. 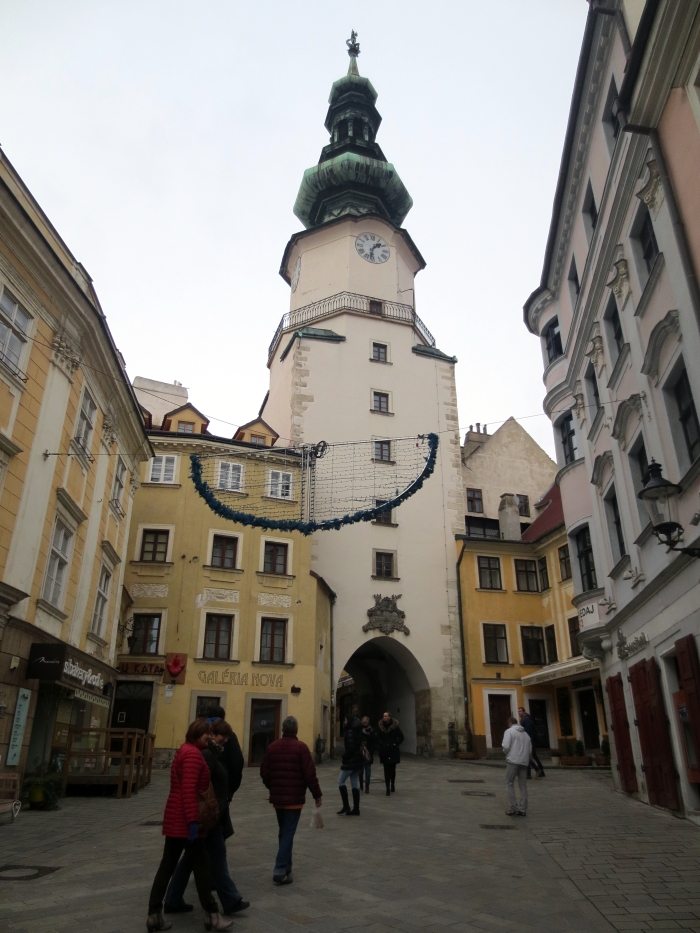 Bratislava castle, or Hrad in Slovak, a huge building on a  rocky hill, is the attraction you should not miss as it won’t only take you for a journey back in time but it will also offer you an amazing view of the city surroundings and Danube river as well as of the Austrian-Slovak border area. 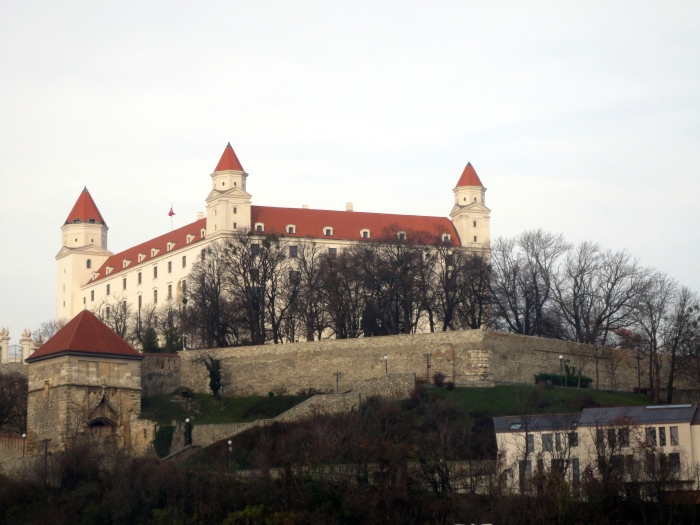 View from the Castle

Another famous landmark of Bratislava is the New Bridge, Most SNP in Slovak, built across the Danube river and the UFO restaurant on its top, 85 meters from the ground level. You can access it from a lift and you will need to pay an entrance fee in order to enjoy the panoramic view from the observation deck. Make sure you check the opening hours before visiting the restaurant as there is no access to the observation deck when the restaurant is closed. 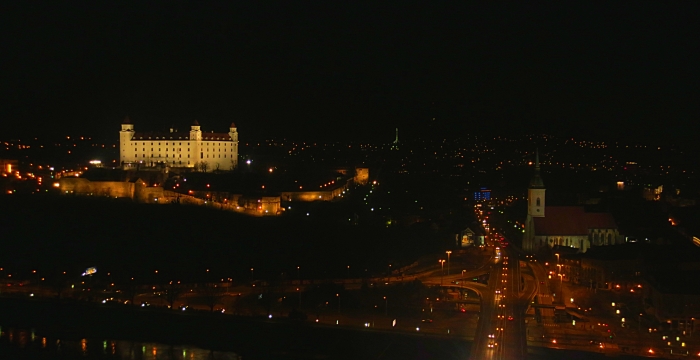 View from the UFO observation deck

Another modern touch in the city are the human size sculptures in the Old city, every person that has been there has taken a picture with or Paparazzi, Napoleon Soldier or Schone Naci sculpture. The one below is the ‘Man at work’ scuplture, Slovaks call it  Cumil that means the watcher. It’s the statue of a communist era worker resting, or it is also said that he is peeping up women’s skirts!

A 10 minute walk from the old city will take you to the church that jumped out of a fairytale, the Blue Church or the Church of St. Elizabeth, the most appealing art nouveau building in Bratislava. On a sunny day its colour is the same with the sky and its interior is also pastel blue. 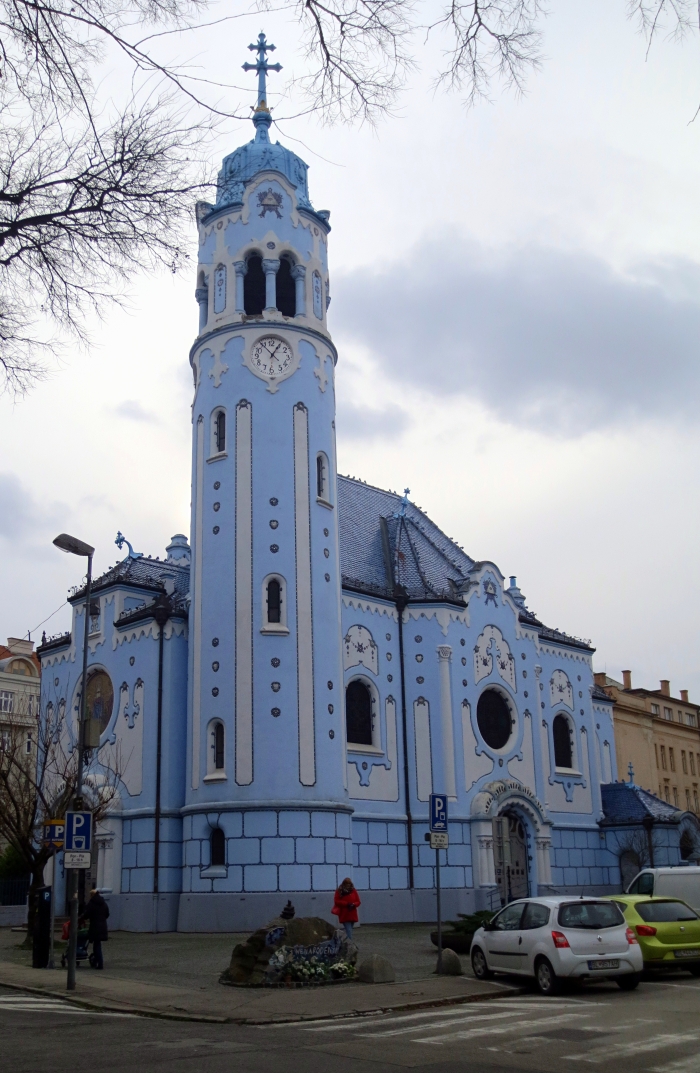 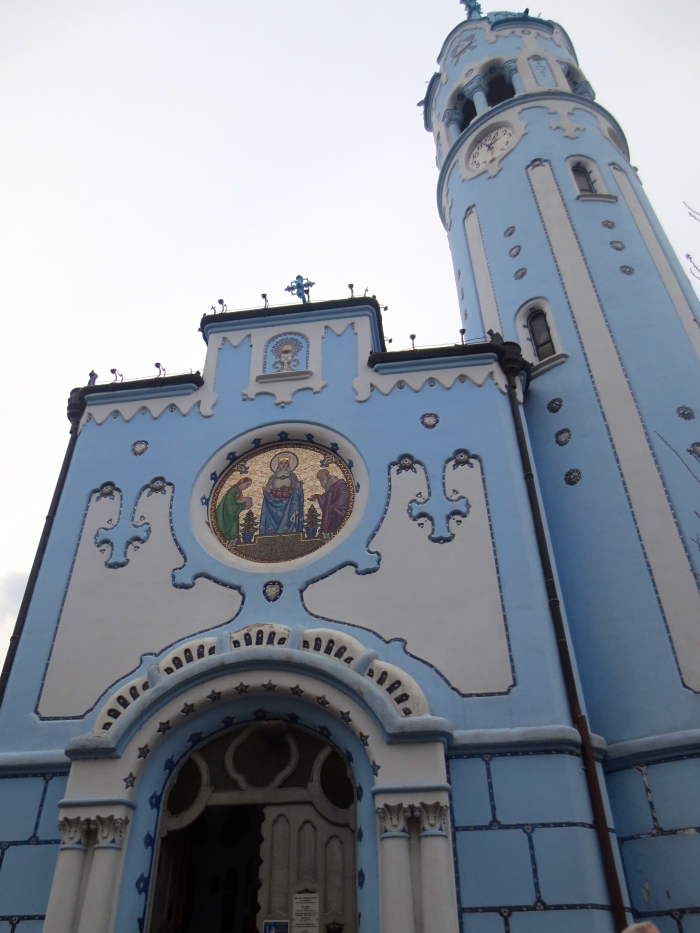 The Grassalkovich Palace is situated just a 10 minute  walk from Michael’s Gate, and it is the residence of the president of Slovakia. Its large gardens are now a park open to the public.

If you are a mall rat the city won’t let you down, you can visit Eurovea Galleria, a huge shopping center built right on the bank of Danube river. It is part of the super modern Eurovea business and retail complex.

My hotel suggestion is the one and only Park Inn Danube not only located on the best spot of the city between the New Bridge, the Castle and the Cathedral but also offering an indoor swimming pool and sauna for unbeatable prices. I will never forget the view from my room, the New Bridge on the left and the Castle on the right.

A restaurant I would suggest especially if you would like to try Slovak dishes is the Flag Ship Bratislava Restaurant, right outside the old city and 5 minutes walk from St. Michael’s Gate, its wooden interior and the great atmosphere cannot leave you indifferent. You should try the garlic soup served in bread and sheep cheese gnocchi.

Most of the visitors of Bratislava are Vienna tourists visiting the city just for an one day trip but I would really recommend spending  a full weekend there, it is easy and cheap as many low-cost airlines operate in Bratislava airport with direct flight from big european capitals like Berlin, Paris, London, Madrid or Brussels.

Have you ever visited this small charming city? What were your impressions?